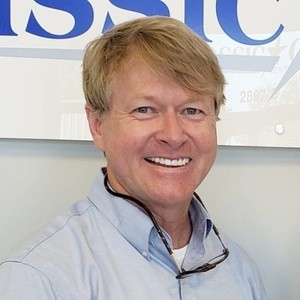 John Beasley grew up in Geneva, Alabama. He received his Bachelor of Science degree in Business Administration and Bachelor of Arts degree in Psychology from Auburn University. After completing college, he moved to Savannah, Georgia where he began working at Brasseler USA. John soon found that dentistry was his life’s calling. His career at Brasseler was like a hands on MBA program. He travelled to Germany for laboratory technology training, managed all distribution for north America, and completed his tenure as the Eastern USA Sales Manager for Laboratory products. His passion for dentistry led to a minority investment in a small local lab. It was here that John met his longtime business partner, Chris Witherington.

After 6 years of phenomenal growth, John and Chris decided that it was time to start their own lab and opened Classic Craft in 2008. John attends annual events within the lab industry and oversees Customer Relationships. He also works with Classic Craft partners on large case treatment planning. John loves offshore fishing, hunting doves & shooting sporting clays, and most importantly spending time with his wife Catherine, their daughter Madeleine and catching up with his son Pearson.